In the middle of January we participated at the Trainers’ Forum of the Mobilitas Hungarian National Agency in Nagykovácsi. The aim of the meeting was to inform the trainers on the newest information on the Youth in Action Programme and to jointly evaluate the experiences of the programme. As we are not really “Budapest goers”, we could meet organisations that we have never met before and maybe without this meeting we could not ever meet. This month we started a new project entitled Messzelátó. In the framework of this project leaders and helpers of youth organisations and young people of the North-Great Plain region jointly practiced the open speech and the public performance. As part of the project two times we had photography exercises in order to help the participants to prepare good presentations. In February we trained the members of the student union of Debrecen to rhetoric and PR. In March we were shooting the actual conference of the “Ezek a fiatalok/ These youngsters” conference series. We had two trainings in Kisújszállás as well, one on group building and one on organisation promotion. Even this month we participated at a cooperation meeting in Hajdúnánás under the umbrella of the Regional Youth Forum. We undertook to prepare the image of the Regional Youth Forum, in order to do the best, we had a logo-making competition amongst our volunteers. The winner was selected at the next forum in the Rock-school of Debrecen. The winner logo was designed by Attila Fórizs, who could not finish the whole booklet of images, but a new volunteer from Csíkszereda, Alpár Dávid was willing to finish this work. In April we did a communication training in Pécs for young journalists In April also we organised a training entitled Önindító for organisations who are beginners in the European Voluntary Service (EVS). We were asked by the Diszinfo (Mezon) to record the professional youth conference of Hajdú-Bihar county. Right after it we had another training in Hortobágy entitled Generátor for youngsters who are interested in making youth initiatives in the framework of the Youth in Action Programme. 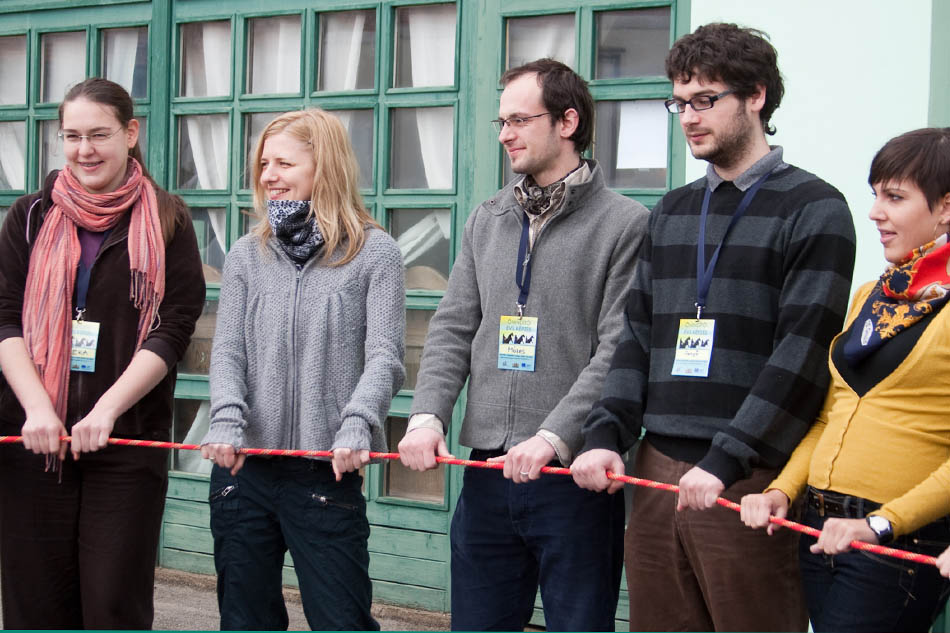 In May the HAHA Association of Debrecen and the TOP 25 of the Netherlands started a series of action to prevent accidents and to promote road safety. We were asked by the HAHA to prepare a movie in the action that took place in Debrecen. We promoted the action by this. Our French volunteer Pierre Baudchon has been working on an exchange of painters from Lille, France and Debrecen, Hungary. He managed to involve the cultural management of both cities to support the project and involved several institutions also, like the MedgyessyFerencHigh School, the Alliance France and the Új Inkognitó Bar. We prepared a short movie on this.
It was during the project “Messzelátó” when the participating youngsters had an argument on why their peers sre so negative on youth participation and why they are so inactive in community life. The result of the discussion was that something has to be done. This is how the Youth Info Action youth initiative was born. The basic idea is that we do not have to wait for the youngsters to knock on the door of the youth information centre, but we have to go to places where they often go and to inform them there. The youngsters of two university cities Debrecen and Oradea got together and started the project in order to inform the youngsters of both cities about different youth programs. First in May we went to the StudFest in Székelyhíd (Romania) and then in July to the Campus Festival. Our Estonian volunteer, Maili Tannenberg prepared a slide-show on the action.
On 20th August we went to Szajol, where the local youth club invited us in order to promote the European Voluntary Service. As a result of this the local association (Harmónia) registered in the EVS database as sending and hosting organisation.
In September we joined the Pool of Trainers of the Mobilitas Hungarian National Agency responsible for youth affairs. Just after the training of trainers we organised a pre-departure training for EVS volunteers in Hajdúszoboszló together with the On the Way Association.
In October we spent a lot of time with the DiszInfo organisation, first at an EVS teahouse then at a youth exchange, where Italian, Serbian and Hungarian young people jointly prepared a theatrical performance. In November we went to Túristvándi, where we made a video on the first part of the Trin Pasura training, where roma and non-roma youth leaders exchanged experience. The training was organised by the Fekete Sereg Youth Association.
We closed the year with an introduction at the annual conference of the Mobilitas and then we had a bit of rest. It was a tuff year but it was worth doing it.