Our school radio project was on the right track with more delicate techniques and undiminished pace. We should mention two of our results: the Gábor Dénes Vocational School started its own training on the basis of our project and one of our apprentices Krisztina Szabó became the editor in chief at the Szóla Rádió. To meet the increased demands we started a summer media camp. At the same time it became more difficult to harmonise the use of the studio among the participants. At that time we were using the studio of    Radio 1. 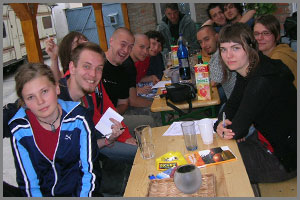 The day of 11th September 2001 did not vanish without a trace; masses of refugees from Afghanistan appeared in the Refugee Camp of Debrecen. At an interview we got to know the Menedék Hungarian Association for Migrants, and decided to launch an educational radio campaign in order to provide the locals with authentic information about the refugees’ culture. With this project we wanted to lower the risk of an evolving tension between the locals and refugees. The Friss Rádió from Debrecen, and the EstFM Rádió from Budapest, which already ceased being, broadcasted the 52 part series with the support of the UN Refugee Directorate General Budapest Office and Word Bank Small Grants program.
It is difficult to measure the results of the prevention program, but one thing is sure: during the time when the radio series were broadcasted and in the following years no atrocity happened between the local people and the refugees.